The Assistance Program of the Board of Pensions and the Presbytery of New Covenant provided Emergency Assistance Grants to Rev. Umbenhaur and his family after their home was flooded by Hurricane Harvey.

The Reverend Mike Umbenhaur likes to say he “blew into town” on the heels of Hurricane Ike.

He was answering his first solo pastor call, at First Presbyterian Church of Orange, Texas. FPC is a beautiful, historic church in Orange, a deep-water port on the Texas-Louisiana border. “Cajun country,” he said.

It was September 2008 when Rev. Umbenhaur, his wife, Jennifer Walton, and their three young children arrived — one week after Ike brought catastrophic flooding and intense winds to Orange County. One of Rev. Umbenhaur’s first tasks as FPC’s new pastor was to join congregants in helping with long-term recovery efforts in neighboring towns.

Gradually, life returned to normal. Rev. Umbenhaur, who was born and raised in California and rarely saw rain — let alone hurricanes — never dreamed the city would face another 100-year storm less than a decade later. Nor did he imagine that he and his family would one day find themselves trapped by floodwaters, flagging down a rescue boat, and receiving financial assistance from The Board of Pensions of the Presbyterian Church (U.S.A.) and the Presbytery of New Covenant.

But in August 2017, Harvey, a Category 4 hurricane, slammed into the coastal town of Rockport, Texas, about 300 miles southwest of Orange.

“There were no calls to evacuate, and many of my neighbors were staying,” Rev. Umbenhaur said. With three teenagers and two pets to consider and no relatives nearby, the Umbenhaurs decided to sit tight. 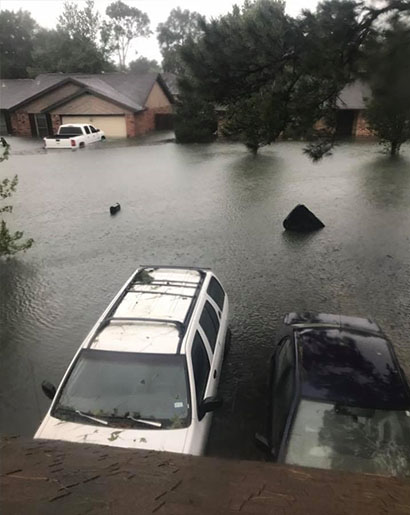 “We figured we had a 50-50 chance of making the right decision,” Rev. Umbenhaur said.

Harvey stalled, however, dumping 60 inches of rain on Orange in 48 hours.

The storm wouldn’t budge, and “the water kept coming and coming and coming,” Rev. Umbenhaur said. Once it flooded his street, he realized it was too late to leave. “The moment of realization that you can’t get out …,” he said, his voice trailing off as he relived the memory.

The Umbenhaurs moved to the second floor and prepared to hunker down for a night without power. As darkness fell, muddy water engulfed their cars, rendering them useless; soon it seeped into the house, through the seams in the front door.

By morning, the Umbenhaurs’ first floor was flooded. Rev. Umbenhaur waded outside to flag down a passing boat. The rescue experience “was surreal,” he said. “It was like something you’d see on CNN.”

The Umbenhaurs, along with about 500 other flood victims, were taken to a nearby church. There was no power and very little food. But it was dry and welcoming, and in short order Rev. Umbenhaur received two phone calls: One was from his Board of Pensions Church Consultant, the Reverend Kevin Keaton; the other, from General Presbyter Lynn Hargrove, of the Presbytery of New Covenant.

“They said, ‘Here’s what we’re gonna do: We’re gonna try to send you money, and you’ll need to document everything.’”

Rev. Umbenhaur was in a daze, but his colleagues were on a mission to get whatever help they could for the pastor and his family. “Kevin and Lynn were constantly in contact with me and relaying information to the Board of Pensions,” Rev. Umbenhaur said.

Within a few days of their home being flooded, the Umbenhaurs received an Emergency Assistance Grant — a check — from the Board of Pensions Assistance Program to cover the immediate costs of being displaced from their home. 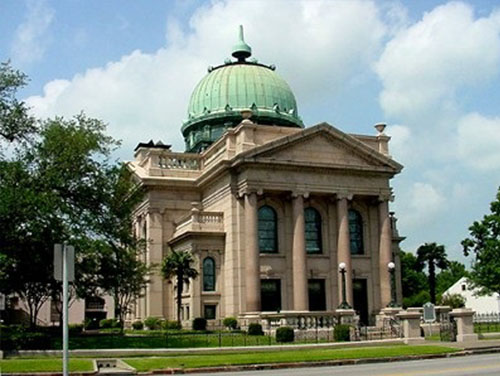 From their church shelter, the Umbenhaurs called friends who lived just two hours north of Orange. Their friends immediately jumped in their cars to come get them. The family was finally able to breathe a sigh of relief and give thanks for the bonds of faith and friendship.

Despite this respite, the trauma was just beginning.

Five days after their rescue, the water had receded enough for the Umbenhaurs to return home and begin removing the debris: ruined belongings, rugs, flooring, insulation, sheet rock.

While Rev. Umbenhaur worked, his thoughts were on his flock. “As the pastor, I’ve never felt more helpless than those first few days after we came back.” He knew many congregants had been displaced. Some parishioners’ homes were in even worse shape than his was.

He had been mucking out for two days. He felt numb, as though he could not go on alone. “I was so in need of having things done for me, things I couldn’t do myself, whether physical or emotional or otherwise,” he said.

An outpouring of love and support

At about this point, a dozen volunteers from First Presbyterian Church, Baton Rouge, Louisiana, found him. In just six hours, they mucked out the entire house. Other volunteers helped Rev. Umbenhaur haul his kitchen cabinets and appliances to the curb. The next day a disaster recovery team from Texas Baptist Men sprayed chlorine throughout the house to prevent mold, and provided fans.

Within two weeks, two congregations that Rev. Umbenhaur had once served, his home church in California, and a group of his wife’s high school friends donated money for a car.

“I have never been more proud to be … part of our connectional Presbyterian Church.”

The Board of Pensions and the Presbytery of New Covenant provided two more Emergency Assistance Grants to the Umbenhaurs to pay for uncovered remodeling costs, once the exclusions of their homeowner’s insurance policy were known: certain pipes, six of 12 stairs, fencing.

Rev. Umbenhaur said he was changed by the Church’s immediate — and sustained — support: “You could just feel the love coming through.”

“I have never been more proud to be called to be part of our connectional Presbyterian Church,” he said. “I have never felt more globally connected.”

Rev. Umbenhaur is used to ministering to the needs of others, as he did when he first arrived in Orange. But this time, he said, “others came and washed my feet.”

The Assistance Program provides a wide range of need-based grants to active and retired ministers, employees, and their families. Last year, the Assistance Program gave out 1,157 grants, for a total of $5.5 million. The Board’s careful stewardship of its resources makes possible grants like those that made such a difference in the lives of the Umbenhaur family.